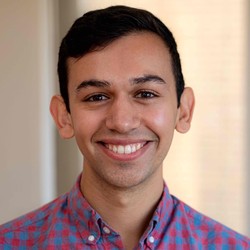 Eyal Hanfling is a PhD student in Political Science at the Massachusetts Institute of Technology (MIT), concentrating in comparative politics and security studies. His research interests include political violence, ethnic conflict, and text-as-data, with a focus on South Asia. Prior to starting at MIT, Eyal was a research assistant in the South Asia program at the Stimson Center. He holds a BA in Public Policy Studies and South Asian Languages & Civilizations from the University of Chicago. Hanfling is a recipient of the Critical Language Scholarship, National Security Language Initiative for Youth Scholarship, and NCAA All-Academic award. He has advanced proficiency in Urdu and Hindi, and basic knowledge of Arabic, Hebrew, and Spanish.